Archith Seshadri is a global journalist/host with 12+ years experience in TV news. 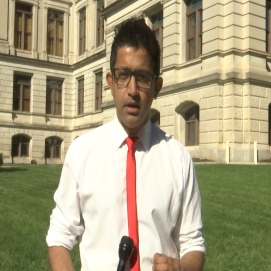 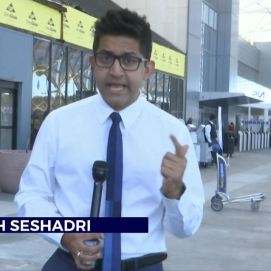 Archith is an engineer turned a journalist with 10+ years of newsroom experience in both local and network news. Archith has worked in Macon, Augusta, Charlotte, Atlanta and New Delhi. Archith was born in India, raised in Australia and moved to the United States 20+ years ago. Archith thrives on breaking news, social media and live field reporting. Archith is Nexstar’s Atlanta Bureau Chief filing daily reports for 15 stations across 5 states in the south east. Archith covers state government, healthcare and politics. Prior to this, he served as the prime time anchor for a global English network based in New Delhi, India.

Archith also worked as writer/producer for CNN, a reporter for the Atlanta Journal Constitution and a reporter for Khabar Magazine. He has appeared as a guest correspondent for Cheddar (New York), TRT World (Istanbul) and Republic World (Mumbai).

Previously, Archith was a news anchor for WION (Zee News) in New Delhi, India. Archith presented the afternoon and evening prime time bulletins and co-produced/anchored the 7 p.m. signature show: Your Story. Archith has anchored several breaking news events including the London terror attack, the Manchester bombings, the UK elections and the Barcelona attack. Archith reported from the White House in Washington D.C. for Prime Minister Narendra Modi’s first face-to-face meeting with US President Donald Trump. Archith managed the entire US election coverage, booked 70+ guests and filed multiple stories from New York on the impacts to South Asia. He covered the major political developments from Chennai including the death of Chief Minister Jayalalitha. Archith also pitched, produced and presented an entertainment-news show called “Unscripted” where he has interviewed celebrities including A.R.Rahman, Vidya Balan and Arjun Rampal.

Prior to WION, Archith worked for CNN International in Atlanta, Ga. where he gathered news from across the globe, managed reporters and provided editorial input for all platforms. Archith played an instrumental role in covering the Paris and Brussels terror attacks, the MetroJet plane crash and the Charleston church shootings. Archith spent several years in local news markets across the United States. Archith worked for the Fox affiliate in Charlotte, NC. Archith was the only journalist to cover a 500 mile bike ride to Washington D.C. as hundreds of police officers cycled to the nation’s capital for National Police Week. Archith reported from the CDC in Atlanta and filed exclusive stories on the Ebola outbreak. He used his iPhone to report on the snowstorms that hit Charlotte and Atlanta. Prior to covering all things in the Carolinas, Archith worked as an anchor/reporter for the ABC affiliate in Augusta, Ga. He launched the station’s first weekend morning newscast. Archith covered 3 officer involved shootings, investigated the Augusta YDC, trained with US marines in Parris Island, SC and field anchored from the Masters.

Archith got his first taste of television in Macon, Ga where he worked as a reporter/producer. Prior to his 10 years in journalism, Archith worked as a consultant/project manager at Accenture for 6 years. Archith graduated from Georgia Tech with a B.S. in Electrical Engineering and a M.S. in Industrial Engineering. Archith served as the local chapter president of the Asian American Journalists Association (AAJA) and the Vice President of Internal Affairs with the Network of Indian Professionals (NetIP). A classically trained singer/pianist and a singer-songwriter, his flair for music inspired him to start a music academy called “Studio! Music Academy” where he manages 60+ students. From beauty pageants to fundraisers, he has served as a talent judge, emceed community events and also a trained improviser/actor! Archith grew up in India, Germany, Australia and the United States.